“No community center or neighborhood park should have services reduced while the Department is subsidizing suburban golf in San Mateo County,” says Brent Plater, Executive Director of the Wild Equity Institute. “We deserve better: it’s time to close Sharp Park Golf Course and bring the funds saved back to San Francisco’s communities, where the money rightfully belongs.”

The analysis likely under-estimates losses because it does not include recent capital expenditures, such as the $300,000 San Francisco taxpayers paid over the past two fiscal years to install new pumps and repair pipes at the chronically-flooded golf course.

Sharp Park Golf Course is owned and operated by the City and County of San Francisco but located in Pacifica, California. The golf course has illegally killed two endangered species for several years. Both species — the endangered San Francisco garter snake and the threatened California red-legged frog — require aquatic habitats to survive, but the golf course’s new water pumping system can drain these habitats more rapidly, putting both species at risk of further harm.

The Wild Equity Institute is working with dozens of community, park, recreation, historical, and environmental groups to eliminate San Francisco’s expenditures at Sharp Park while building a better public park on the land in partnership with the National Park Service. Go to wildequity.org to find out more about our plan to save San Francisco money, protect the environment, and provide recreational opportunities everyone can enjoy. 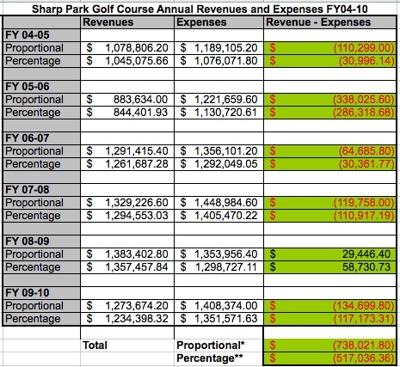 Today’s calculations were made using the City’s own golf fund data. To prevent double-counting, subsidies from other taxpayer funds were removed from Sharp Park’s revenues: these are transfers, not true revenue generation. Similarly, subsidies to other taxpayer funds were removed from the analysis. “Unallocated” funds—revenues and expenditures that benefit more than one golf course—were apportioned to each course using two methods. In the first (proportional) method, unallocated revenues and expenditures were apportioned equally to each golf course managed by the Recreation and Parks Department. In the second (percentage) method, unallocated revenues and expenditures were apportioned to each golf course according to the golf course’s contribution to the golf fund. As seen above, both methods showed substantial annual losses at Sharp Park Golf Course.