SAN FRANCISCO— In a major advancement in one of San Francisco’s most important biological discoveries, the U.S. Fish and Wildlife Service will announce tomorrow its decision to list the Franciscan Manzanita, Arctostaphylos franciscana, as an endangered species under the Endangered Species Act.  The final listing rule will become effective October 5, 2012.  The U.S. Fish and Wildlife Service will also propose to designate over 300 acres of critical habitat for the species in 11 different areas across Presidio Trust, San Francisco Recreation and Park Department, and other lands; it will accept public comments on the critical habitat proposal through November 5, 2012. 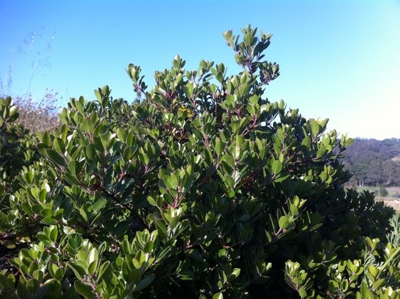 The last wild Franciscan Manzanita—but not for long!

“The Endangered Species Act gives us the best tools available to protect and recover the rediscovered Franciscan Manzanita,’ said Brent Plater, Executive Director of the Wild Equity Institute. “Coupled with the Bay Area’s best minds in the manzanita business, the day will come when this species is once again a functioning part of our biological community.”

“We’re pleased this rare plant is getting the protection the species so desperately needs to survive and recover,” said Jeff Miller, conservation advocate with the Center for Biological Diversity. “Hopefully this signals that Fish and Wildlife Service has turned a corner on protecting endangered species.”

Under the Endangered Species Act, the protection of a species’ “critical habitat” is closely tied to the ultimate recovery of the species.  Species with their critical habitat protected are generally twice as likely to recover than those without critical habitats protected.  Because all of the Franciscan Manzanita’s historic habitats have been destroyed by unsustainable development, the Fish and Wildlife Service’s critical habitat proposal emphasizes areas which are suitable for reintroduction or the establishment of new populations that have suitable habitat characteristics.

The proposal, if implemented and supplemented by areas that are still being evaluated for designation as critical habitat, will bolster efforts to create bioregional protected areas in San Francisco that provide appropriate recreation opportunities for all while preserving the last remnants of San Francisco’s biological heritage. 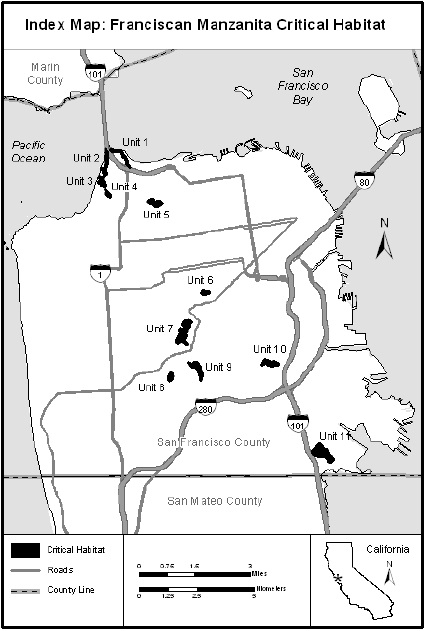 The Fish and Wildlife Service will take comments on its critical habitat proposal for 60 days. To submit comments, go to the regulations.gov rulemaking portal, and enter FWS–R8–ES–2012–0067 in the keyword search box.

The individual plant was subsequently moved to a more secure location in the Presidio to avoid disturbance from the ongoing construction of the Doyle Drive project. While the individual plant was saved from immediate threat, no formal protection was provided to ensure the entire species recovered. The proposed rule will provide formal Endangered Species Act protection for the plant: it requires creation of a binding recovery plan for the species; it prioritizes federal funding for the species’ recovery efforts; and if found prudent, it ensures that the species’ critical habitats, both those currently occupied and those that are needed for reintroduction, are protected.

The announcement follows a formal listing petition submitted by the Wild Equity Institute, the Center for Biological Diversity, and the California Native Plant Society, and subsequent litigation by the Wild Equity Institute when the proposal was delayed. The proposed rule was finally released on the day that the Fish and Wildlife Service’s responsive briefs were due in the litigation; and now the final rule has been announced, giving formal protection to this imperiled species.