The California Red-Legged Frog is the largest frog native to the western United States. For many years, it was considered one of two subspecies of the Red-Legged Frog, Rana aurora, with the boundary between the two subspecies just north of the Golden Gate National Parks: for example, Point Reyes National Seashore can have individuals from both subspecies, as well as intergrades of the two. However, recent studies indicate that the California Red-Legged Frog is its own species, Rana draytonii, and that the boundary between it and Rana aurora is much farther north.

The California Red-Legged Frog has been intertwined with California history and the lore of the West in several surprising ways. Made famous as the title character of Mark Twain’s tale “The Celebrated Jumping Frog of Calaveras County” it was a favorite competitor in jumping frog competitions until the California Red-Legged Frog was displaced by species imported from other parts of the world. It became a staple of the diet of the forty-niners during the California Gold Rush, and eventually became an item on the menu of San Francisco’s finest dining establishments.

Unfortunately, the California Red-Legged Frog has now been lost from over 70% of its historic range. It is currently only found in select coastal drainages from Marin County south to Baja California, with a few isolated populations in the Sierra Nevada and the Transverse ranges. In 1996, the United States Fish and Wildlife Service listed the California Red-Legged Frog as a threatened species under the Endangered Species Act.

The threats facing the frog are numerous, and correspond to a global decline in amphibian species. Urban encroachment on existing habitats, the construction of reservoirs and water diversions that destroy feeding and breeding habitats; pesticide runoff and drift disrupting the species’ endocrine systems; livestock grazing; and the introduction of invasive, colonial species that compete—and sometimes eat—the California Red-Legged Frog.

In the GGNP, some of the best habitats remaining for the California Red-Legged Frog are at Mori Point in San Mateo County, where the species is eking out an existence along with another listed species, the San Francisco Garter Snake. Sharp Park Golf Course, however, is adjacent to Mori Point and repeatedly harms both the California Red-Legged Frog and the San Francisco Garter Snake. 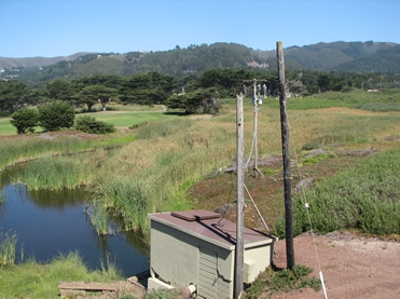 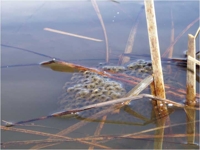 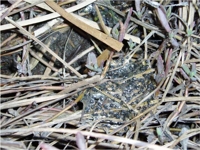 When the pump house drains water off the course, it exposes frog eggs to the air, the eggs dry out, and a generation of frogs can be lost.

Sharp Park Golf Course has been killing California Red-legged Frogs for many years. Every year when normal winter rains occur frogs begin to breed at Laguna Salada and Horse Stable Pond, laying egg-masses that attach to aquatic vegetation. Because of the golf course’s poor design and unfortunate placement, these same winter rains cause several of the golf course’s fairways to flood. For many years, the golf course would simply pump the water through the sea wall and drain the water off the course: and in the process strand frog egg masses that would desiccate and die, losing entire generations of this threatened species.

In 2005, the U.S. Fish and Wildlife Service sent a letter to the golf course management explaining that the Endangered Species Act prohibited killing the California Red-legged Frog, and suggested that they obtain a permit to continue operations of the course. Rather than apply for a permit, the golf course managers initiated a monitoring plan to halt pumping whenever frog egg masses were present. Unfortunately, in 2008 more stranded egg masses were discovered after golf course pumping operations. The Golf Course continues its pumping operations, and the threat they pose to the California Red-legged Frog remains.