A competitive event to see and save endangered species.

Mark your calendars! The 2010 Golden Gate National Parks Endangered Species Big Year kick-off celebration will begin January 9, 2010, 1pm at the Sports Basement in the Presidio, San Francisco. The GGNP has more endangered species than any other National Park in continental North America. The Endangered Species Big Year is a race against time to see and save each of these endangered species, with guided recovery expeditions and park explorations all year long! At the kick-off celebration, we’ll have free prizes, drinks and snacks, a short presentation about the GGNP’s endangered species, and then we’ll head outside to search for the Western Snowy Plover, an imperiled shorebird clinging to existence at Crissy Field. At the end of 2010, the person who has seen and helped save the most endangered species will win the Big Year and a cash prize! 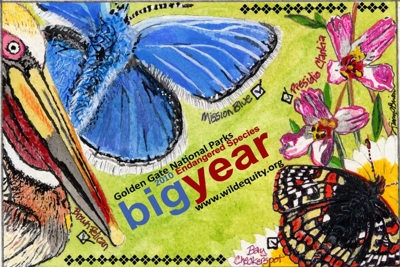 Victory for Sharp Park! Thank you to everyone who wrote messages and attended the Recreation and Park Commission hearing last Thursday. About 60% of the numerous speakers came to support a new national park at Sharp Park, and we convinced the Commission to table Phil Ginsburg’s preposterous and unjust all-golf alternative: for now. We also successfully demanded that a scientific peer review be conducted on Ginsburg’s alternative. This was a major step forward in creating a better public park at Sharp Park, a park that protects the environment, protects our communities from climate change, and provides recreational opportunities everyone can enjoy. If you haven’t taken action yet, you can do so here.

Thanks and see you outside,

The Cascadia Research Collective reports that a dead Gray Whale stranded in Puget Sound this week contained a large amount of ocean debris in its stomach when it died: including a golf ball. 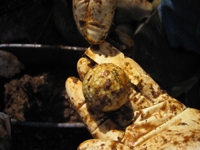 This is the fifth Gray Whale stranding in Puget Sound this season. Although the whale’s cause of death can’t be declared definitively, researchers called the debris in the whale’s stomach a sign of our poor ocean stewardship.

Gray Whales are no longer protected under the Endangered Species Act, but still face many threats. The Wild Equity Institute’s staff and board have partnered with the Cascadia Research Collective’s scientists to protect whales on many occasions in the past.

We had great luck searching for the California red-legged frog at Mori Point this past weekend. But they aren’t always easy to see.

Can you find four frogs in this photo? If you can, it’s about time you got started on your GGNP Endangered Species Big Year: you’ve got what it takes to compete for the $1,000 grand prize! 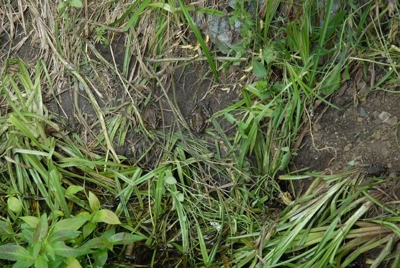