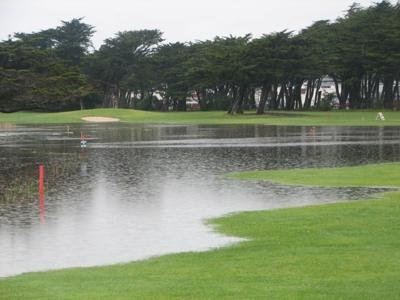 Why does San Mateo County want to manage this disaster of a golf course?

According to recent reports, San Mateo County is considering committing a financial boondoggle by acquiring Sharp Park Golf Course from San Francisco. Given environmental and economic realities, it would be reckless of San Mateo County to take on this golf course. The golf course has lost nearly 1.8 million taxpayer dollars since 2004, and the golf market has been steadily plummeting over the last decade. So who will be expected to pick up the tab for the hundreds of thousands of dollars that the course loses annually? The taxpayers of San Mateo County, no less.

Sharp Park Golf Course, located in Pacifica, is known for its atrocious environmental record, lack of favorability amongst golfers, and ability to hemorrhage several hundred grand on a yearly basis. However, delusional San Mateo County District Supervisor Don Horsley believes that with the right changes, they could reverse the course’s decade-long trend of financial drain.

Despite all the financial data available, Horsley claimed that “[Sharp Park Golf Course] will draw a lot of people. We believe the course makes money.”

However, there is no evidence available to back Horsley’s assertion. One’s beliefs and opinions have no value when they contradict objective fact- sure, the course technically makes money, but it also loses money…and a lot more money than it brings in at that. And this is no new development- these trends have been consistent for over a decade now.

Sharp Park Golf Course’s lack of popularity can largely be attributed to the oversaturation of the golf market in the Bay Area (let alone a rapidly failing golf market in the rest of the United States)… more so than to its mediocrity as a golf course. A few changes in course design are not the changes that the golf course needs to start making money again.

San Mateo County has recognized that the course been poorly placed and designed, and on top of everything else poses a threat to endangered wildlife such as the California Red-Legged Frog and San Francisco Garter Snake, but why won’t they accept the fact that the course will never be profitable?

2015: Another Year of Losses at Sharp Park Golf CourseBrent Plater Discusses Wild Equity in December Issue of Save The Frogs! Mag...
Scroll to top