A recent, well-publicized study suggests that cost-effective methods for eradicating invasive weeds may harm the Lange’s metalmark butterfly, adding urgency to the Wild Equity Institute’s efforts to eliminate the underlying cause of weed growth in the species’ habitat: nitrogen deposition from power plants in the vicinity of the species’ last stand at the Antioch Dunes National Wildlife Refuge.

Effects of Herbicides on Behr’s Metalmark Butterfly, a Surrogate Species for the Endangered Butterfly, Lange’s Metalmark, published in the journal Environmental Pollution by two Washington State University entomologists and a US Fish and WIldlife Service scientist, assessed the effects on butterfly larvae of three herbicides — chemicals that are intended only to impact plants. They studied a near relative of the Lange’s metalmark butterfly. The authors applied the herbicides directly onto butterfly larvae and recorded survivorship. They found that the chemicals reduced by 1/4 to 1/3 the number of larvae surviving to pupal stage — and thus the number of healthy adults. 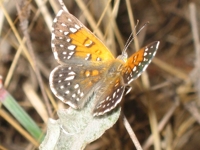 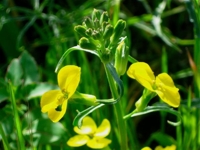 Nitrogen emissions from facilities like the Gateway Generating Station, above, may spell the end for three endangered species
(L-R): the Antioch Dunes evening primrose, the Lange’s metalmark butterfly, and the Contra Costa wallflower.

Whatever the mechanism, the study indicates it is more urgent than ever to address the root cause of the Lange’s metalmark butterfly’s ongoing decline: non-native weed growth driven by nitrogen emissions from several nearby power plants. The Antioch Dunes National Wildlife Refuge is similar to a desert ecosystem in many ways, including the nutrient-poor condition of the soil. These conditions allowed the Lange’s metalmark butterfly and two other endemic, endangered species — the Antioch Dunes evening primrose and the Contra Costa wallflower — to evolve and adapt to these generally difficult conditions.

However, the California Energy Commission has recently approved several natural gas-fired power plants in the immediate vicinity of the Antioch Dunes National Wildlife Refuge. The power plants emit hundreds of tons of nitrogen into the air, which then can deposit in the wildlife refuge. Nitrogen is a potent fertilizer, and the addition of nitrogen into the system is changing its chemical composition of the soil so that it favors non-native invasive weeds. If this continues, the endangered species on the site could be lost.

Moreover, the concentration of pollution in the Antioch/Oakley area from power plants is also jeopardizing human health in predominantly minority, low-income communities. By addressing the root cause of harm to people and the plants and animals that accompany us on Earth, we can build a more sustainable and just future for all.

The Wild Equity Institute has initiated legal proceedings against the EPA, the California Energy Commission, and several private energy companies to stop this harmful activity. The Center for Biological Diversity and Communities for a Better Environment have joined us in this matter.