San Francisco Mayor Gavin Newsom will release his budget proposal to the public June 1. A growing chorus of environmental and social service groups are hoping the Mayor’s budget will help save community services by closing the money-losing, endangered species-killing Sharp Park Golf Course.

Add your voice by contacting the Board of Supervisors & the Mayor. Demand that the City stop subsidizing suburban golf in San Mateo County by closing Sharp Park Golf Course and reinvesting the money saved back in our neighborhoods, where the money belongs.

San Francisco is poised to cut millions from community centers and neighborhood services this year to close the City’s budget deficit.

Yet the City is simultaneously concocting plans to subsidize suburban golf in San Mateo County with an $8 million dollar irrigation project, a $15-30 million dollar sea wall, and up to $14 million dollars in golf course enhancements.

The Wild Equity Institute has proposed a more just solution: close Sharp Park Golf Course, deed the property to the Golden Gate National Parks, and return the money saved back to San Francisco communities, where the money belongs. 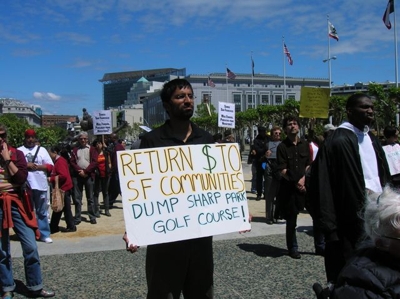 Under our proposal, San Francisco can reinvest its money in local Government services, the killing of endangered species at Sharp Park would stop, and we’d all get a new National Park that everyone can enjoy.

Please send an e-mail to the Board of Supervisors & the Mayor and demand that the City stop subsidizing suburban golf in San Mateo County: close Sharp Park Golf Course and reinvest in our neighborhoods during these times of fiscal crisis.