San Francisco — The Wild Equity Institute filed a formal administrative petition with the Obama Administration today, asking the U.S. Fish and Wildlife Service (“Service”) to protect migratory bird nests from destruction unless and until prior written authorization from the Service is obtained.

Dubbed the “Pale Male Petition,” the requested rule change was inspired by the infamous destruction of Pale Male’s nest on 5th Avenue in New York City in 2004—which the Bush Administration deemed lawful under a peculiar interpretation of the Migratory Bird Treaty Act. After Pale Male’s nest was destroyed he did not produce offspring again until 2011.

“It’s been eight years since Pale Male’s nest was illegally destroyed, and the Obama Administration still has not restored full protections to migratory birds,” said Brent Plater, Executive Director of the Wild Equity Institute. “The Pale Male Petition will close a loophole that continues to threaten migratory birds and their young.”

The proposed regulations would reverse a nearly decade-old, convoluted Bush Administration policy that allows any person to destroy a bird nest if the nest is deemed “unoccupied” at the time of destruction: so long as the person avoids “possessing” the nest in the process of destroying it. Although the Bush Administration policy seems difficult to reconcile with the laws of physics, it provided the legal underpinning for the destruction of Pale Male’s nest in 2004. 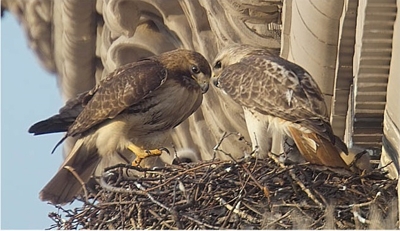 Pale Male and his mate Lola in 2003. Photo by Lincoln Karim.

Pale Male, arguably the world’s most well-known Red-tailed Hawk, had a global following after he successfully nested on a storied building near Central Park’s Toy Boat Pond. But the building’s celebrity occupants—including former CNN news anchor Paula Zahn—grew tired of the concomitant commotion. The building’s management responded by applying for a depredation permit for Pale Male’s nest in December of 2003, claiming that the nest was “inactive.” The Service responded by citing a new interpretation of the Migratory Bird Treaty Act which, for the first time in the MBTA’s history, treats “active” and so-called “inactive” nests differently. It then denied the permit application stating “[w]e do not issue permits for the take of inactive nests . . . . An inactive nest is a nest without birds or eggs.”

Armed with this new legal interpretation, the building managers waited for Pale Male, his mate Lola, and their young chicks to leave the nest, and then tore the nest and all support structures down while the birds were away. No violations of the Migratory Bird Treaty Act were ever prosecuted by the Service.

The Service’s new policy thus encourages destruction of bird nests without permits. Under the policy, anyone may destroy a nest so long as no egg or fledgling is within it at the moment of destruction, regardless of whether an adult bird is using the nest for shelter, for roosting, or if the bird returns to the same nest every spring. As demonstrated in the Pale Male Petition, this policy violates the Migratory Bird Treaty Act (“MTBA”) and its implementing regulations, which expressly prohibits the destruction of migratory birds and their nests—whether they are active or inactive—unless a permit is first obtained from the Service.

Yet the Service continues to follow the Bush Administration policy today, and consequently countless functioning bird nests have been destroyed without oversight from expert biologists and without legal consequence. The Service must change this policy in order to adequately protect migratory birds, as the MBTA requires.

“The Pale Male Petition requests common-sense regulations that will protect thousands of birds,” said Plater. “We owe it to future generations to make sure expert biologists determine which nests can be destroyed, rather than supers and TV anchors.”

On April 15, 2003, during the Bush Administration, the Service issued the Migratory Bird Permit Memorandum, which introduced a new policy position on the destruction of migratory bird nests. In this memorandum, the Service argues that when an “inactive” bird nest—one without birds or eggs—is destroyed, there is no violation of law and no permit to destroy the nest is required so long as the nest is destroyed without “possession”. The memorandum justified this assessment by suggesting that only “possession” of nests is prohibited under the MBTA, and that “destruction” does not entail “possession.”

The Pale Male Petition shows concretely how this logic is flawed: